skip to main | skip to sidebar

At £175 including booking, Download is not a festival ticket everyone can afford, and I'm reluctant to spend it to spend the weekend camping with drunken heavy metal teenagers. So I'm on the lookout out for a day ticket to see recently added reformation du jour, Faith No More. It makes sense. It'd be cheaper, I won't have to camp or pay extra to watch Def Leppard. I won't lie, the rest of the bill is pretty damn fine, but just I can't do the camping thing anymore. 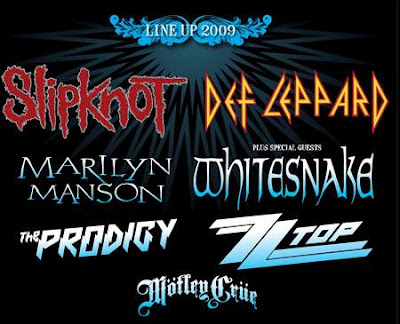 Alas, no day tickets this year, according to the Download website, although their position may change later on. There are plenty of upmarket camping options available, if you want to spend £300+ extra per person for a POD cabin / tipi spot. These reside in the slightly more exclusive RIP camping area, where they keep the feral children out with high prices. There are nice plumbed toilets, proper showers, and being interestingly specific, a "cash bar".

That part caught my attention, because there has been some talk of a cashless Download being rolled out this year, with wristbands loaded by punters with credit. Downside of the cashless system for the punter, all that leftover credit on the wristbands. That would be a mini boon for festival organisers though. All the 50ps and pounds on wristbands... only worthwhile getting that money back if you're leaving the site and it's easy to do (with no queues). Most people won't bother for small change, and think about that multiplied by 60,000. That's how much money that could make back against the massive cost of installing the system in the first place, and every year following. In a direct quote from the Gigwise article above

"Other ideas Probyn is exploring is keeping credit on one wristband throughout the festival season and allowing fans to use any money leftover at certain retailers after the festival has finished."

So LiveNation might well be holding on to the cash then. Maybe making a little percentage for redirecting traffic to HMV or Itunes. That would be just lovely. While earning interest, and keeping what isn't spent (it'd have to have a time limit). Oh Christ, imagine if they could charge up front for the wristband itself? They could hit you up on the way in and on the comeback. This thing could be a mini goldmine in the long term (albeit after the potentially major initial costs)!

Remember the cash bar for the slightly higher rollers? That sounds like a nicer luxury now, doesn't it? Although the arena bars and food stalls will be cashless, so even they will be tapped up. Everyone is a winner, no? No?
Posted by Tom at 18:26 No comments: